Season for walking
out into white frost
under the black moon.

Scenting the wet
earth, lying fallow:
ice has its own smell.

Tasting night on the
tongue, cobwebby, thin,
and the mouth’s own heat.

Hearing the silence
staking its own claim.
Then – the keen owl cry

sadly to fierce stars
as once the wolves cried,
walking here also.

We watch her circle the house, crouched low to the ground.
Her hollow flanks flutter, in out, in out, and her fur,
black-tipped, as if charred, shivers with them.

She has sensed the warmth of breath, the throb
of a heart. She has scented the rust
of blood, its salt abundance.

And we, behind the window, observe
her progress, her imperceptible and ceaseless
movement, and wonder where

the thing she stalks is waiting,
living and trembling,
waiting for its death.

The Girl Of Wood

A quiet girl, this one:
sometimes, she mutters, hushy and breathless,
gibberish of her own, or groans deeply,
on an autumn evening,
her feet encased by damp,
her hair wind-blown.

A sturdy girl, this one,
phlegmatic, stocky, her movements reluctant,
her broad feet planted widely.
Worms graze on her and yet
the blight, the canker,
are menaces the poor thing’s never heard of.

A sorry girl, this one,
and helpless, too.
She’s not afraid of fire and only stares
at the ruby light as it travels
her passive thighs,
and rooks screech out and rush off out of reach.

It is here again! I dreamt of it it when I slept,
in formless nightmares of feathers, of picking, of pecking.
Now, waking, I sense it with my eyes still closed,
perched on the bedstead, stretched tall by a feral tension,
which holds it frozen, its plumage expanded and sooty,
as if engorged by the shadows of the room,
as if it has drunk the blood of the dark and grown full.

I feel its gaze through my eyelids, its stare, its glow,
my body slack in its yellow irises,
and I feel its intent, hot wishes in its head,
as it angles its beak to strike and curves its claws.
It has found me before: it remembers I am good food.
The taste of my heart has made it unslakeable.
It is back for more: I am sluggish, inert on its altar.

I look, at last, in the blue hour of the morning.
Its eyes set fires in the grey chill of the bedroom.
It quivers perkily and prepares for movement
and the breeze of its wing stirs, breath-like, on my pillow
and reminds me, somehow, of how I bled when it gripped me.
A tree has sprung up in the corner: its leaves are juiceless,
and let fall some dust as a feather, falling, brushes my sealed lips.

This House of Flesh

Living in this body like Jonah in the whale,
I wish to be released from its rich blubber
and fly about, a soul without a casing,
buoyed by the air, perpetually in motion.

If I, snakelike, could shed these walls of flesh,
these heavy bonds of bone, this yellow hair,
I would be slight and weightless as a bubble,
a fleck of sea-foam, drifting thistledown.

Eyes wouldn’t notice me. They wouldn’t sear me,
scoring my body through and through with stares.
Hands wouldn’t jostle me and push me down.
Feet wouldn’t stamp me, crushing out my breath.

I’d stay awake all night, tireless, unhungry,
my thoughts not jammed by pain and lassitude.
Ideas would spark and chatter through my ether.
Only, of course, I’d have no tongue to speak.

The idols had been stored in suitcases.
She took them out and piled them
up like sticks. Flames munched
them up in trickles, vanishing
them incrementally,
their hands, their toes,
their faces, poised and innocent
as blossom, and they blackened
and crumbled, flew like rooks.

The robes went too,
the masks, the jade, the bronzes,
and their cremation stunk
like funeral pyres
and left a damaged circle on the grass,
which wouldn’t heal,
no matter how she watched
for rains to wash it back
to how it was.

At this time, there was movement
in the house and sounds were heard,
locally and far off,
of dying things,
lamenting and protesting.
Plates hurled themselves at walls
and mirrors shattered.

She carried those charred gods’ bones
inside herself,
unwillingly, grudging reliquary.
They performed resurrections
in her sleep
and reassembled hacked
and ashy limbs
into new wholenesses, Osiris-like.

They’d fed her once,
with words and images,
birthed hauntings and proclaimed, oracular,
but she disowned their visions,
fought to gulp
the rushing air, instead, its messages,
from the true God, who would not, could not lie.

His gospel closed her eyes,
sealed her lips tight.
On its sparse sustenance,
she kept her silence,
kept clean – which she preferred
to being glutted
on the ambrosial poison the idols teemed with. 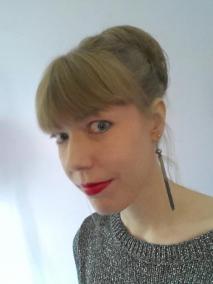 Kitty’s poems have been widely published.  She is one of the two winners of the Indigo Dreams Pamphlet Prize 2016 and her debut pamphlet, Seal Wife, will be published in August 2017.  www.kittyrcoles.com